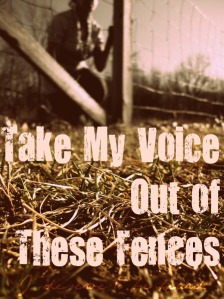 Silence or death. What if only those two choices remained in the world? She had finished the second page of her story when she- or rather, her character arrived at that question. She barely understood that concept, that condition in which one is really less than one. She always had more: the ability to think, just like the majority of the world. And with that, she had no trouble talking, writing and relating. Thoughts have to be stated, she thought, otherwise, what would be their point? It’s not really about freedom of speech, it’s simply freedom of Life.

.
Life.
What if words are tinted blood-red? What if each word smells of that fluid in our veins? How much would we pay for words? Her story was about to end but her thoughts about her character’s plight went on. Yes, what if words do cost a life? Will I be willing to pay for them? She shook her head. No, what is she thinking? It will not happen in today’s world. Today, freedom is a marketed label with a sticker on the side; black, white and a dozen numbers. Overproduced and inflated.
.
But what would he choose? Her character. He was the introverted type but, he was sure of his thoughts. Would that confidence be enough for him to forsake his life? Perhaps. Maybe I should toss a coin, she thought, heads for death and tails for silence. What a perfect solution.
.
Heads.
The coin spun on the table, trying to find its end. Round, round, round it goes. Yes, she decided, he must think, speak and write. He must choose Death. But perhaps, she thought again, he wouldn’t die but rather, rise above these oppressions of sorts. Perhaps he would be one of those.. revolutionaries.Yes, that’s it. My story is about a revolutionary and it’s time for him to have the freedom of Life.

.
Her pen fused ballet and Bharatnatyam as blue ink raced across duplicate sheets of solid yellow paper. The freedom of Life. She had her story. The revolutionary, her character, chose neither silence nor death but rather, found his voice. People around him changed, Institutions broken up and the Imperial Government shook in his thunder. My hero can fly. He changed the world.

.
Thunder.
But that thunder was not only in her papers. It spread in her world too. I too have become a revolutionary of sorts, she realized as they placed labels upon labels on her forehead, dangerous to civil society. Words are lethal weapons and I.. I am a danger. She- the Writer, the Speaker, the Thinker, the Tosser of Grand Coins- was given a choice. Silence or Death.
They chose the latter.
/.
Can the freedom of Life end? Who sets those boundaries?
Who set mine?

————————————————————–
Freedom of Speech. The majority of the world take it simply for granted. On March 18, 2009, it was proved that freedoms somehow have boundaries, limits set by people who do not understand and do not care for Life. On this day, a man named Omid Reza Mirsayafi became the first blogger to die in prison. I did not know him or what he wrote or what he thought or what he did. But I do know that he was unquestionably entitled to his freedom of Life. OR318 is a a movement stemmed out of this tragedy to make sure he is also the last. Click, read and say something. Because the world does not run on black and white scales; each of our colors deserve to have a spot on the Grand Kaleidoscope- each deserves his own voice.
.

7 thoughts on “When Words Become Executioners”